An Inside Look at An Introductory Firearms Class for Women

I never thought I would agree to give up a chunk of my weekend and take a handgun class. It’s just not me. I’d rather do some shopping or finish errands. Yet, I found myself on a dreary March day at the range getting my gear together and wondering if I made the right choice. I guess you could say that the impetus for this decision was two-fold.

First, I blame social media. Scrolling through daily posts, I’m alarmed at the sharp increase in violence on our streets, and every graphic and vicious video I see screams the same thing to me: Do not be a victim.

The second reason was more personal. I have always relied on my husband for protection. It was nice and easy to be able to rely on the traditional roles in marriage—it meant I didn’t have to take out the trash, kill spiders or learn how to shoot. To me, home/family defense was a man’s “thing.” However, as time went on, I realized that I was just shirking my responsibility. I knew I wasn’t with my husband 24 hours a day, and that without him, the protection of the family rests on my shoulders. It was my duty as well.

It was early Saturday morning, overcast and a bit chilly. I was at the Richmond Rod and Gun Club, carrying my gear through the parking lot and looking for the sign that said “Gunterest.  My husband happily signed me up for the Women’s Basic Handgun Class and shortly after it was sold out. It was the first I had ever attended, and I had my reservations. I was afraid I would be too slow, too inept and too unsafe. In my heart, I wondered whether I was too old to try to learn this stuff. I seriously contemplated just going home.

I spotted the Gunterest and CTT Solutions banner, and my eyes were drawn to some tables covered with black cloth under several canopies. There were some light refreshments—water and juice—and another table held trays with each participant’s name on it. Strangely, it added some elegance to an otherwise rugged setting.

Mia Wood, founder of Gunterest, greeted me with a warm smile and after a short introduction, told me to place my unloaded firearm in my “tray.” So far, so good.
I could see that some women came in groups, others in pairs, and a few, like me, came solo. I easily made friends with the women next to me and was so relieved to find that for most of them this was also their first venture into the unknown world of firearms. I could tell I was not the only one with fears and reservations, and it was a comforting thought.

The class started out with Mia introducing herself and her reasons for founding Gunterest. It was all so relatable. She was a former LA County Deputy District Attorney in Compton, California, among other things. When she decided to leave it all behind, she turned to her bucket list of things she wanted to do, and shooting firearms was one of them. She never imagined she would enjoy it as much as she did, and she wanted to share her passion.

She then turned and presented our day’s instructor, Mike Pannone, whom I knew all about him through my husband. He was a member of the U.S. Marine Corps Reconnaissance and later the U.S. Army Special Forces and eventually Delta. He is also a top competitive shooter and a sought-after instructor by private and government agencies—foreign, as well as domestic. We were in good hands.

I wondered why he would take time out of his schedule training big bad fighters and seasoned shooters to instruct housewives, career women and first-time shooters. When he spoke to the class, he addressed my unspoken query. He believed that women were the fast-growing demographic in the shooting world that has, for far too long, been unaddressed, and even ignored. He believed that women usually made better students and shooters, if only they were given the proper instruction. He immediately put me and the other women at ease. There was no pressure. He wanted us to get more comfortable with handling our firearm and to learn the basics of marksmanship.

With introductions out of the way, Mike began by explaining the safety rules clearly and concisely. He did not try to “dumb” things down. He was direct and impressed upon us the importance of handling the firearm with the respect it deserves.

Next, he gave us a rundown on the basic kinds of firearms and the simple mechanical differences between them. He then proceeded to show us how to disassemble our own firearms and put them back together. As a challenge, he had us exchange guns and do the same thing. By this time, my trepidation has all but melted away, and a feeling of satisfaction took its place. Although I was horrified when Mike disassembled four different firearms on my tray and had me put them back together, I astonishingly did, and something clicked.

With my husband being a LEO (law enforcement officer), I was around firearms all the time, but I was never really comfortable with them. It wasn’t fear, necessarily, but more of a feeling of insecurity as to my ability to handle them and use them effectively. With this morning’s exercise, my confidence soared and I realized that the firearm was a tool, and just like any other tool, I can learn to be proficient in using and manipulating it. I could sense all the other women felt the same.

Before moving on to live fire, Mike taught us the fundamentals of how to grip the gun, how to aim and find the right sight picture. Using a SIRT (shot indicating resetting trigger) pistol, he worked with each one of us separately and made sure that we all understood the lesson. Then, it was off to the firing line. Once again, Mike worked with us individually and stood right by us as we emptied a magazine into a paper target. 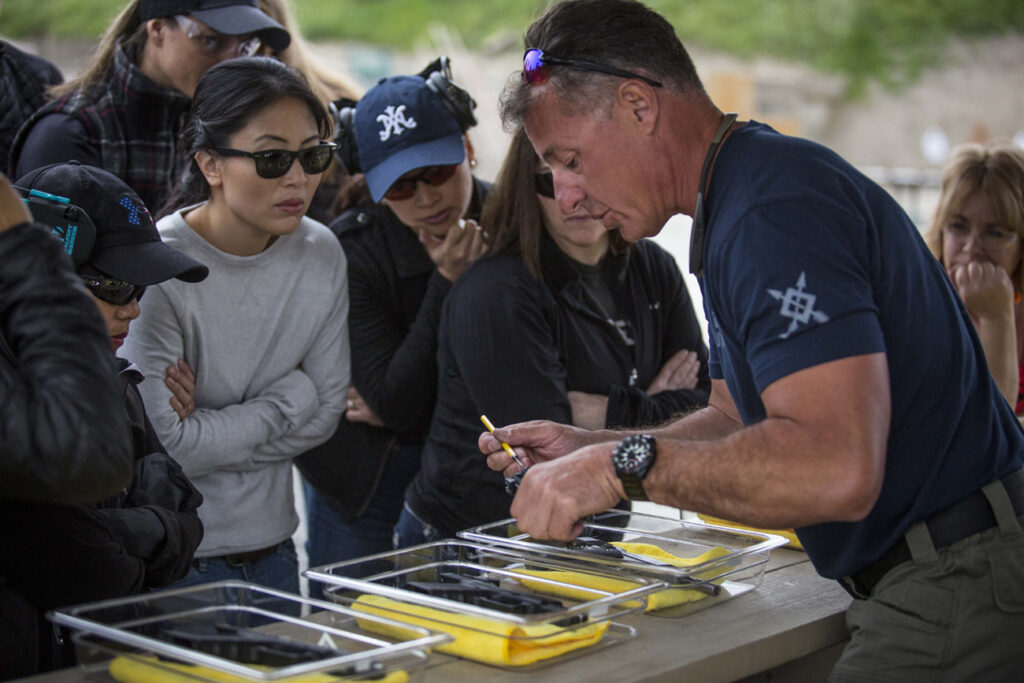 Lunch followed, and along with it, a lecture on mindset. I heard that this was a favorite component of the class, and I could see why. Mike’s unique perspective as a modern-day warrior was thought provoking and was an eye-opener for most of the women present.

Mia also proved to be a wonderful resource as she shared her experiences in carrying her firearm concealed and the challenges women face as they take a more active role in self-defense.

The rest of the time was spent honing in on what we learned earlier and getting more trigger time. We practiced marksmanship, reloading and shot steel. We also got to work on one-handed shooting, strong as well as weak hand. By the end of the class, we were all shooting the steel targets consistently at 40 yards. 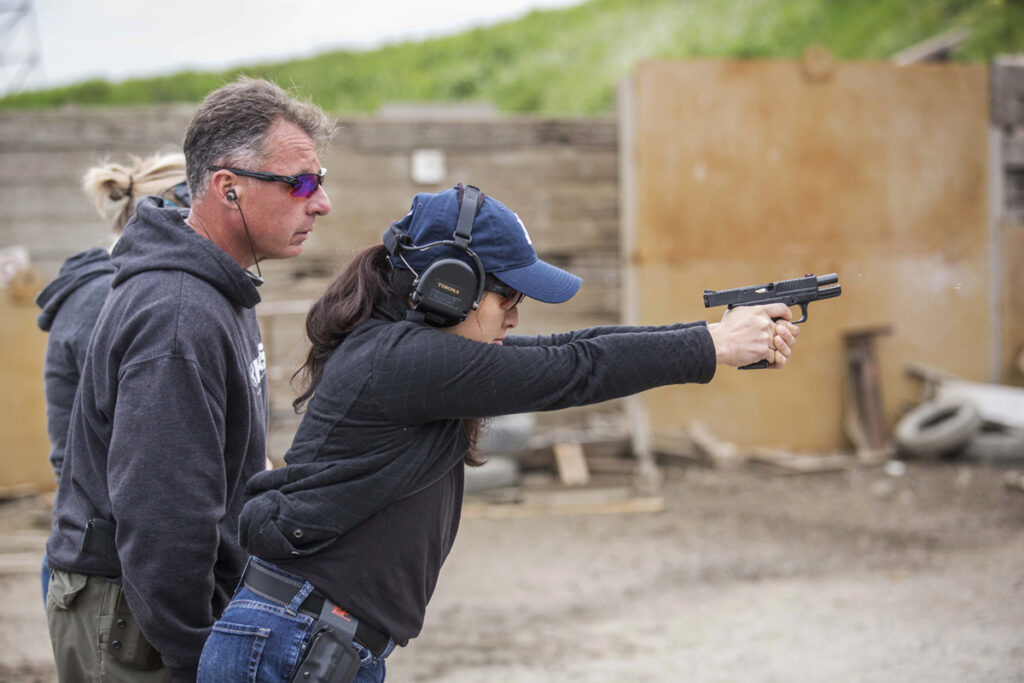 Was it worth giving up my lazy Saturday? Absolutely! Mia and Mike achieved their objective even before the day was through. All 14 participants had become more comfortable, more confident and more competent at handling firearms. We were all satisfied with the level of marksmanship we had achieved during a single day’s training.

As for me, little did I realize that trudging down the gravel road to the shooting range that fateful day in March was a path to self-discovery. It was staggering to realize that I found the whole experience gratifying. It was even more shocking to me that by the end of the class I had resolved to spend more time on the range to perfect my craft, and I was eager to try and shoot different firearms.
Needless to say, I will be the first to sign-up when Gunterest comes back to the Bay Area with the Women’s Intermediate Handgun Class. I’m eager to push myself and to see where this newfound passion will take me.

Frances Tirona is a stay-at-home mom of 10 children and the wife of a police captain.  Her oldest is a U.S. Marine, and she homeschools the other nine.  She describes herself as a novice shooter.

This is optional but recommended.  The company provides a limited number of guns with holsters at no extra cost.  The gun buffet they bring is also for the ladies to sample.

Make sure it fits your gun.

This is the minimum, but you can bring more.

This will support your gun and holster.

Gunterest provides a hostess table with refreshments and snacks, but people can bring their own, too.

Bring 300 rounds of ammo for the Basic Handgun course and 400-500 rounds for the Intermediate.

We always recommend layers, regardless of the location. Inevitably, the temperatures fluctuate 15-20 degrees.

Closed-toe shoes are a must.  Think along the lines of tennis shoes or light hiking boots. Many outdoor ranges are dirt or gravel and there are lots of loose casings.

Jeans or light hiking pants are best, but wear anything comfortable that you don’t mind getting dirty.

These are optional but recommended.  It’s not impossible for hot, flying casings to slip down into and behind sunglasses.

No scoop necks or low-cut collars.  They catch hot flying casings much easier. Whatever you wear, it will have to be tucked into your waistband, so as not to get caught up in your gun (and trigger guard) while reholstering.

Watch out for those little paracords on the zipper tabs on your vest, sweater or jacket. They also get caught on triggers if your top is unzipped.  You can cut them, or I can show you a trick when you come to class as to how to get them out of the way.

— Mia Wood is the CEO and founder of Gunterest

During the class, students practiced marksmanship, reloading, one-handed shooting, strong as well as weak hand. Before the end of the day, they were shooting steel targets at 40 yards.

Frances Tirona acknowledged that she is not with her husband every minute of the day, so she realized that the family’s protection could also rest on her shoulders.